If you have ever had the opportunity to chat with Scott at the Haile Farmers’ Market, you know that he is full of information about animal husbandry and raising livestock naturally.  Not only does he read a lot, he also attends farming conferences annually and has been raising various types of livestock for many years for our own use -- rabbits, milking goats, chickens (broilers and layers), and pigs. We officially began the farm business in 2011.  Since then, we have spent most every Saturday at the farmers' market, offering naturally-raised, chemical-free, nutrient-dense pork, chicken and eggs to our community.

As our farm began to grow, so did our need for more land. As a result, we moved the farm to a larger parcel in Lake City in July 2015.  With the big move now behind us, we were ready to venture into raising cattle so that we could add grass-fed and grass-finished beef to our inventory of quality, chemical-free meats.  We purchased some calves in 2016 with the intent to only raise feeder cattle and not breed.  We started with a steer (castrated male) and a few heifers (young females).  All were Black Angus except for one Limousine.

This picture was taken in April 2017.

The cattle are progressing and growing at an expected pace and enjoying the new pasture that was planted just for their arrival.  They have about 5 acres to roam and forage on grass, and we're planning on expanding to 10 acres based on a rotational grazing schedule once the water line is completed.

While we noticed that the steer didn't look, and even sometimes act, like a steer, we didn't pay too much attention.  After all, we purchased a castrated steer.

Around November, we noticed that one of the Angus heifers, #50, was filling out a little more around the belly at a faster pace than the others.  This caused us to really pause and think.  After all, when cattle are completely grass-fed like ours, they are lean and normally don't put weight quickly.

After consulting with a few friends who have experience with cattle, we called in help to have #50 examined.

It was confirmed. #50 was pregnant and was in her third trimester!

#50 on the left; the limousine on the right. Picture was taken November 2017.

Now what does this all mean?  That's exactly what Scott and I were asking ourselves.  While we had not intentionally ventured into breeding and birthing calves, that is where we were.  Do we need to do a lot of research? Do we need to have a vet on stand-by?  Do WE need to be prepared to "go in" to pull out the calf?  I felt like we were becoming like those nervous first-time parents.

Whenever we went out to the field, we would try to determine if there were any physical changes with #50 and if so, what it meant.  Scott has experience breeding rabbits and pigs, but not cattle.

We asked John Mims (Cypress Point Creamery) for some guidance. (He and Nancy sell their milk and cheese next door to us at the market.) After all, he just had 37 Jersey calves born on his farm over the last several weeks of 2017.  The input John provided sounded very similar to what happens with expecting pigs (sows) with one difference – you don't usually have to be prepared to "go in."

We watched for any signs.  Daily.  Constantly.

After being away from the farm for just one night in mid-December to visit family, we noticed something as we pulled into the driveway.  Could it be?  It was a tiny black blob in the middle of the field.  The other cattle were around, but not close by it. We hurried to the house, unloaded our bags and quickly made our way outside to do wellness checks on everyone, which is normal when we return from being away.  I, of course, wanted to go immediately to the pasture and investigate the black blob.  However, Scott, being more patient than me, wanted to check on the other animals in a different order.

Finally, we got to the edge of the field and approached the little black blob and something moved.  As we got closer, the black blob got up and ran to #50. Yes! It had happened! Christmas came early! The baby was dry and appeared to be doing very well.  Mom also was doing well and allowing the baby to milk without any problems.

So we now have an additional Black Angus on the farm – a bull calf.

It wasn't what we had planned, but it all worked out and we couldn't be more pleased. 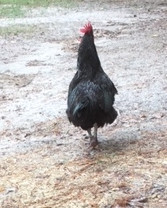 Your Call Can Make The Difference!